What do you understand from the term Retinitis Pigmentosa? 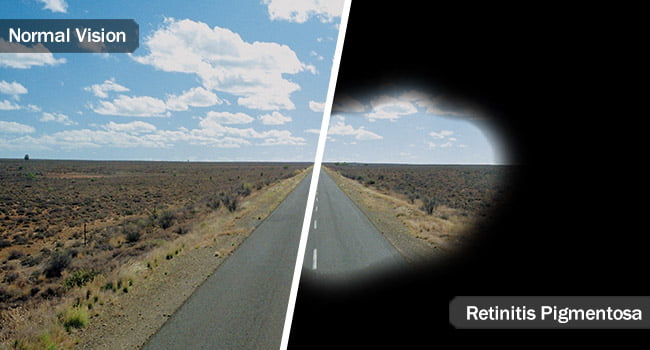 Retinitis Pigmentosa (RP) is hereditary and rare condition. The disease causes the cells to deteriorate at the back of the eye (retina) where the images appear. This further causes the complete or partial loss of vision. This disorder is caused by harmful changes in a person’s genes while producing proteins which affect the relevant cells, and is the main reason of loss of cells in the retina.

Photoreceptors are the cells which are adversly effected due to Retinitis Pigmentosa condition. Those define the ultimate fate of light turning into electrical signals and finally into an image by the brain. According to a rough assumption, one in four thousand people are affected with this disease. People affected start to experience this disease from their birth only. You can have difficulty seeing in the dark or during nightime.

An eye doctor can diagnose Retinitis Pigmentosa through an examination of one’s retina. A cataract surgery is the simplest, common and the most successful of all the other surgeries known. But it becomes more complicated when a cataract shows up with the other eye disease. A cataract surgery in this particular case comes with its own risk such as losing the remaining vision. But an eye specialist can calculate the chance of success before performing surgery. So, it depends upon the condition of every patient. Hence, Retinas pigmentosa and Cataract Surgeries go hand in hand.

There are mainly four treatments offered in Cuba to cure Retinitis Pigmentosa which are as follows:

1. Eye Operation
An orbital vascular adipose tissue is implanted in a sclera choroidal pocket in the eye which is believed to increase the blood flow in the eye which can benefit one’s vision. But it is criticized because RP is a cellular condition and it does not have anything to do with blood flow.

2. Ozone Therapy
Ozone is inserted in the eye of the patient post-operation to increase the level of antioxidants which can help in the recovery process.

3. Electric Stimulation
Post-surgery treatment includes electric stimulation over the head, neck, and palms of the patient.

4. Medications
Medicines are also prescribed post-operation which are available quite easily in Cuba.

previousDevelopments in the Study of Cardiovascular in Cuba