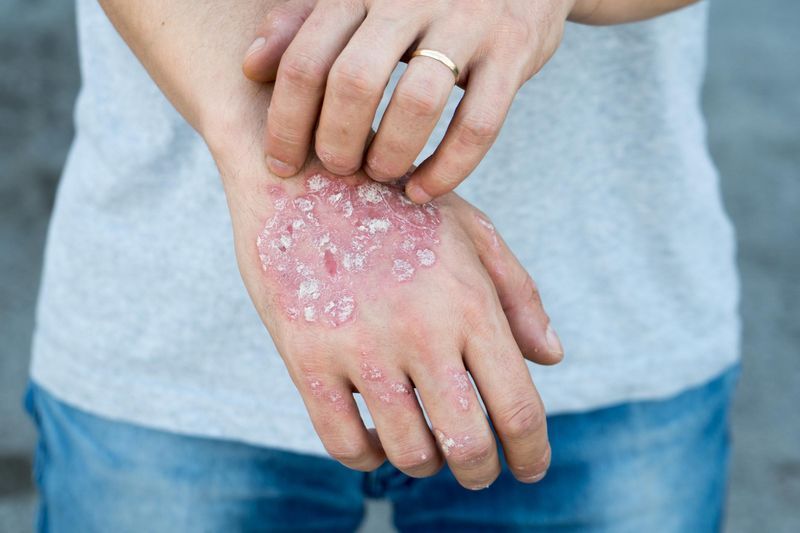 Psoriasis is an incurable but treatable skin condition. One of the most effective treatments is Coriodemina, a water soluble gel developed in Cuba by Dr. Carlos Miyares Cao, world-renowned researcher holding a doctorate in Medicine from the University of Havana, Cuba, with a specialty in Gynecology, Obstetrics and Pharmacology and  is Senior Research with approximately 100 research studies. Coriodemina is an extraction from the human placenta and works by inhibiting the development and regulating the speed of reproduction of skin cell. Cubaheal further adds that Coriodemina has been shown to be effective in about 84.6% of the time with some reporting complete disappearing of lesions after 2 years of application.

Psoriasis is a chronic non-contagious skin disease in which skin cells rapidly increase creating red patches usually with white or silvery scaly flakes. Under normal conditions, skin grows slowly and flakes off approximately every 4 weeks. With psoriasis however, skin grows at a much faster rate and flakes off in days as opposed to weeks. A histological study (a microscopic study of the anatomy of cells) of the plaques has shown signs of abnormal thickening of the outer layer of the skin (hyperkeratosis), retention of nuclei of  the cells in the outer layer of skin (parakeratosis) and a benign growth with an abnormal concentration of white blood cells (T- cells) containing particles in its cytoplasm in the corneal layer of the skin. Psoriasis can develop at any age though it more often appears between the ages of 15 and 35.  It develops equally in men and women and is found among all races and ethnic groups.

Psoriasis can differ from one person to another but will most likely be one of the following types:

Causes is still not fully understood though it is believed to be an immune system problem where by healthy cells are mistaken for ones that the body needs to defend against. Though there is a leaning towards psoriasis being the product of genetics and though about one out of ten people are genetically predisposed to get psoriasis, only %2 – %4 of the world’s population develop psoriasis leading researchers to conclude that it is a combination of environmental triggers and genetic disposition that is responsible for its development. Usually, psoriasis outbreaks begin or worsen by having certain identifiable (and at times avoidable) triggers such as:

In addition to dealing with the physical pain and discomfort brought upon by psoriasis, many sufferers of this skin condition have to also deal with emotional and psychological issues. Those with psoriasis, especially those with visible or whole body flare ups often times feel isolated and excluded with a large number of people reporting that it has a significant negative impact on daily lives. Low self esteem, anxiety, lack of confidence and depression is very prevalent for people with psoriasis. In fact, some studies have shown that psoriasis detracts more from the quality of daily life than does life threatening diseases such as heart disease. The severe itchiness, painful and at times bleeding lesions can make sleeping, walking and dressing among other regular daily routines difficult to achieve.  There is also the general sense of embarrassment not only due to appearances, but also because of a common misconception among the general public about the diseases so much so that sufferers of this condition may not be allowed into certain public areas such as swimming pools or people move away from them in a crowded area.

Psoriasis is an incurable disease but can be controlled or cleared by different types of topical treatment (applied on the skin) or systemic treatment (throughout the body).  One of the most effective treatment is a water soluble gel, Coriodemina, developed in Cuba by Dr. Carlos Miyares Cao who is responsible for discovering that the human placenta has within it a substances for treating vitiligo, psoriasis and alopecia.

Coriodemina is applied directly on the psoriatic area which is then absorbed by the dermal level (the second layer of skin that works as first defense against heat, light, infections and injuries). Its effectiveness is due to the fact that it inhibits the development of psoriatic lesions by regulating the speed the epidermic cells reproduce and by neutralizing small molecules important for cell signaling and communicating (such as cytokines and neuropeptides). As with most treatments, the effectiveness of Coriodemina depends on the age of the patient; the percentage of affected area; the length of time the patient has been suffering from psoriasis and the correct application of the treatment.  Although Coriodemina is safe and can be used on children, pregnant or nursing women and the elderly with no side effects, it is recommended that it should not be used before consulting with a specialist in order to be given the exact amount needed and so as to be given exact instruction on how to apply it in a way that would serve each individual case better.

previousMelagenina Plus Treatment of Vitiligo