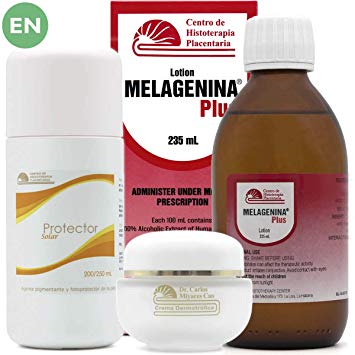 Vitiligo is generally thought of as an incurable disease and at most, people who suffer from this skin condition can only be treated in the hope of improving the appearance of the affected area. Melagenina Plus is an ointment developed in Cuba, has been shown to be effective in about 86% of the time. Indeed, the success of this ointment has lead the the Cuban government in 1987 to establish International and National Clinical Services in order to deal with increased demand for treatment of vitiligo both locally and internationally. Cubaheal asserts that a 100 patients from about 90 different countries a month seek this treatment in Cuba.

Vitiligo is a skin disorder whereby white spots are produced on different parts of the body due to lack of pigment known as melanocytes (cells responsible for color) in the skin. The areas that are more likely to be affected by vitiligo are the face, neck, hands, legs and genitals. However, this skin condition has been shown on different occasions to affect the mucous membranes such as the skin inside the mouth and the nose, and sometimes it can develop on the scalp causing the hair in the area to become white in color.

What are the types of Vitiligo?

Vitiligo can appear in three different ways on the body:

The cause of this skin disease is still unknown though some  studies point to a number of contributing factors such as autoimmune reaction, stress, genetics, exposure to certain chemicals, viral causes and sunburn. However, vitiligo tends to be more common among people with hyperthyroidism (overactive thyroid gland),  pernicious anemia (deficiency in red blood cells)  and adrenocortical insufficiency (adrenal gland do not produce a sufficient amount of steroid hormones) . It is important to keep in mind that these theories have not been proven as of yet. It is also important to note that this skin disease is not contiguous and can not be transmitted from person to person.

Who is affected by Vitiligo?

It is estimated that 1% of the world’s population have this skin condition. Vitiligo usually develops in people between the ages of 10 and 40 and is rare to be diagnosed in infants and the elderly. It has no ethnic, racial or gender boundaries and has been found even in the remotest parts of the world.

How is the quality of life affected?

Though vitiligo has not been shown to cause any medical concerns, pain or irritation nonetheless this skin condition often times leaves patients with a devastating number of emotional and psychological scars, especially for those whose vitiligo is in exposed areas such as the face or hands. It is not uncommon for people with this skin disease to feel stigmatized and ashamed. Many may feel devastated, anxious, depressed and may continuously worry over their social standing as well as their career options due to being overly concerned by negative judgment they feel others will have of them because of their physical appearance. Needless to say, for a number of people with this condition low self esteem and lack of self confidence is a daily battle.

There are a number of treatments that can help improve the skin condition for people suffering from vitiligo.  One such treatment is Melagenina Plus, an ointment developed in Cuba by Dr. Carlos Manuel Miyares Cao. Dr. Carlos Miyares Cao is world renown and has a doctorate in Medicine from the University of Havana, Cuba with a  specialty in Gynecology, Obstetrics and Pharmacology. In the 1970’s while studying the metabolism of the placenta he discovered a substance that triggers the production of melanocytes (the pigments responsible for color in skin, eyes and hair). He then went on to develop the Melagenina Plus by mixing alcoholic extraction of the human placenta with Melagenina and calcium chloride. Indeed, this ointment is thought of as the medication for vitiligo closest to a cure for the fact that it works by triggering the reproduction of melanocytes around the borders and/or inside the area affected by the diseases. When applied properly, results can be seen within 3 to 7 days. What’s more, Melagenina Plus is safe and can be used on children, pregnant or nursing women and the elderly with no side effects. However, it is important to keep in mind that no treatment is effective 100% of the time and that success of Melagenina Plus depends on the age of the patient; the length of time the patient has been suffering from vitiligo; body part affected and proper application of the ointment.  It is recommended that this ointment should not be used before consulting with a specialist in order to be given the exact amount needed and so as to be given exact instruction on how to apply it in a way that would serve each individual case.