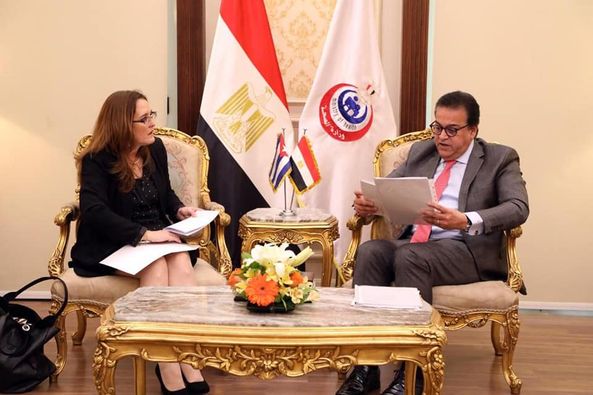 He emphasized the need to increase cooperation between Egypt and Cuba in the fields of health and scientific research in order to improve healthcare services for citizens of both countries.

Abdel Ghaffar met with the Cuban ambassador to Egypt, Tania Aguiar Fernandez. The meeting was held in order to discuss new ways of cooperation between both countries and all fields relating to health care. During the meeting Abdel Ghaffar asserted that Cuba deserves respect for their high-quality expertise in medicine and public health. He also said that Cubans have a distinguished system of healthcare around the world, which is worth benefiting from when necessary.

The meeting tackled means to promote cooperation in the fields of scientific research and benefit from the cadres and scientific and research expertise via research institutions and centers in both countries, the spokesman said.

Both sides asserted the importance of exchanging scientific and professional expertise between the two countries, he added.

The meeting took up exchanging student missions from the faculties of medicine as well as exchanging doctors to ensure the best outcome, he said.

Meanwhile, Fernandez thanked Abdel Ghaffar for his keenness on cooperating with Cuba to improve the fields of public health and scientific research, asserting her country’s keenness on working together with Egypt in all different domains.