The world was definitely a very different place 60 years ago. Cuba, a small but proud country, was trying to find its position on the world’s map in times of geopolitical conflicts between the East and the West. Having a relatively small population compared to its neighbors, Cuba couldn’t hope to secure its position by investing in the military. Instead, they chose a different national diplomatic strategy and made an army of medical specialists. This approach has given Cuba a leading role in the battle for the world’s health up to this day. For 60 years, Cuba has been educating and deploying doctors all around the world to fight against diseases in underserviced areas. It all started with deploying health professionals in Chile after the devastating earthquake in 1960. Today, there are more than 4,000 Cuban health workers in 32 African countries fighting Ebola, cholera, tuberculosis, AIDS, and malaria.

The Cuban health education and training are based on a holistic approach focusing on a combination of healthcare, profound humanistic values, social justice, and community health. Because of this approach, Cuba has a life expectancy rate on par with the US, at the same time spending on healthcare 20 times less.

In 2014, UN Secretary-General Ban Ki-moon sent a statement to the officials at the Escuela Latinoamericana de Medicina (ELAM) in Havana, hailing Cuba for training medical ‘Miracle Workers’ and being on frontlines of global health. In the statement, Secretary-General pointed out that ELAM did more than training doctors:

“I have seen it for myself. As Secretary-General of the United Nations, I travel to many difficult places; desperate places hit hard by earthquakes, hurricanes, or other natural disasters; remote places of deep deprivation; forgotten places far off many people’s radar of concerns. And so many times in these different communities, I have seen the same thing. Doctors from Cuba — or doctors trained in Cuba — helping and healing. Your doctors are with communities through thick and thin: before disasters strike, throughout crises and long after storms have passed. They are often the first to arrive and the last to leave. For those students who cannot come to Cuba, you are also helping to establish medical schools from Bolivia to Eritrea to Timor-Leste. ELAM has trained tens of thousands of students, but Cuba can teach the entire world about health care. I want to join so many others in saluting Cuba’s healthcare system, rooted in primary health care, which has yielded outstanding results — lower infant mortality, higher life expectancies, universal coverage. This is a model for many countries around the world. Through initiatives such as Operación Milagro, Cuban-trained doctors have saved or improved eyesight for millions of people in dozens of countries. You have helped them to see, but you have also given the world vision; a vision of generosity, solidarity, and global citizenship. I am very proud to see it for myself. And I thank you for sharing it with the world.”

Counting all medical training programs established by ELAM medical graduates, the Republic of Cuba has the world’s largest medical school. Currently, medical students from more than 100 countries all around the world are doing their medical training in Cuba.

The program is modeled after the European medical schools. This means it would take a student six years to become a medical doctor in Cuba as opposed to 4 years of training in the US and Canada. In terms of knowledge, this means two extra years of clinical rotations under the supervision of medical professors. The medical school focuses on a wholesome approach: it addresses the biological, psychological, and social aspects of health and disease. Most of the time, a student is at the patient’s bedside and makes house-calls during the training. This way, the students get a unique perspective to healthcare – they learn to recognize and handle all challenges a doctor faces in everyday medical practice from top to bottom of the healthcare system.

The first-year studies involve basic methodology and integrated medicine courses. The second year of medical school is composed of anatomy, pathology, physiology, microbiology, genetics, in addition to psychological and social studies. During this time, a student learns about basic principles of human biology and psychology, fundamentals of healthcare system organization, and disease prevention — all that through the scope of data-driven and evidence-based approach.

In later years of training, students attend clinical rotations and start practicing medicine under the supervision of their professors. 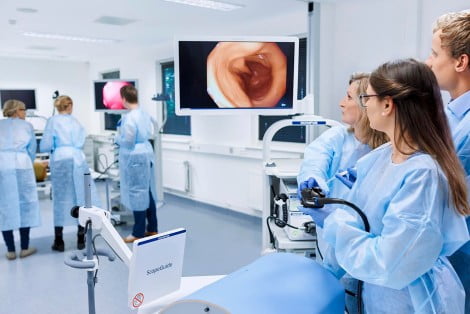 During these six years, no student is left unattended. Professors are available 24/7, group sessions are a commonplace, and students are stimulated to collaborate on various projects during the training. This way, students learn to develop strong professional relationships, a high sense of belonging, and lifelong friendships with their colleagues and professors. In short, Cuban medical school promotes the universal approach where all benefit.

Students who want to pursue a medical career in the US, just like their peers in the US medical schools will have to pass the United States Medical Licensing Exam® (USMLE). In this regard, the Cuban medical graduates perform outstandingly. The US residents who studied medicine in Cuba achieve a match rate of 94%. In other words, sky is the limit for them. Furthermore, the Cuban medical educational institutions are approved by the “California State Medical Licensing Board,” the most stringent in the United States.

Cuban medical school delivers knowledge, and it seems they know how to make students acquire the knowledge. In terms of cost-effectiveness, it is not for free, but the entire medical training comes at a price that’s one-fifteenth of the price in the US. While the cost of the medical program in the US, which includes tuition, fees, books, and interest on loans, reaches up to $1,000,000.00, in Cuba, it is just $73,000. Let’s put it this way- medical training in the US requires about 8-10 annual specialist salaries. In Cuba, it costs 6-8 specialist monthly wages.

The social and cultural life of students during their education flourishes, and its uniqueness is almost unmatched. Cuba possesses rich cultural history adorned by astonishing architecture, but what really makes it stand out is its people, their customs and way of life. In that sense, this place can be described as Heaven on Earth. Cubans focus on what really matters in life – love, friendship, solidarity and unity. These days, there are not many places on the planet left where a person can learn about the values that make us humans. Cuba is one of those few spots for sure!